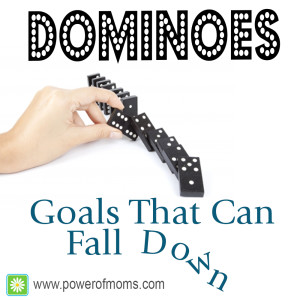 There is nothing truly magical about January and goals. I’ll admit that I’ve never really loved New Year’s Day. The “out with the old and in with the new” is a nice idea, but after years of resolutions that tended to be a bit short-lived and overly optimistic, we have settled into quarterly goals—less to bite off and chew and easily tailored around the specific season of the year…and life! We use these opportunities to push a little progress for ourselves and our kiddos.

With that idea in mind, we had our first goal party yesterday—complete with balloons, brightly-colored goal trackers, and a family discussion about aiming for our goals with little action steps to help us along the way. In the name of health, we even tried a black bean agave chocolate cake…but it was not the success I envisioned–ha!

As part of our goal setting, we did a dominoes analogy with three lines of dominoes leading to a treat. The first line of dominoes was interrupted with a large gap. Of course the domino line was only halfway knocked down. This corresponded to not following through—skipping important parts in a plan (like forgetting to make your bed if your goal is a clean room or trying to run fast or far in flip flops).

The second line was an array of dominoes that veered off here and there, and again didn’t reach the destination. This line represented distraction, a common interference at our house, like going from the math website to a game site or stopping mid-chore to play.

The final line was straight and made it to the treat, or the goal. This represented the little steps we have to set up, piece by piece to reach a goal.

Aside from my one-year-old climbing onto the table every 20 seconds to run across and knock over the dominoes, the object lesson worked for my older children. Now, lest you think this example picturesque, we were ridden with squabbling, re-directing goals, crumpled paper (cue tornado toddler), and complaints over the aforementioned cake. Yet, as bedtime ensued, albeit 30 minutes tardy, I thought with a sigh of relief, the lesson had been learned.

Fast forward to this morning: following the off-to-school scramble (and I don’t mean eggs), I sat with my spunky little one determined to follow through on my goal of sit-down-and-play time before the duties of home and work encroached. We whizzed through a couple toys in five minutes…and next thing I knew, I heard a major clatter!  All of last night’s carefully put away dominoes had crashed down to the tile floor… thanks to my little table dancer. Well, we sat down and started stacking, lining up, and mostly throwing dominoes.  Just for sport, I would try to engage her in a pile to see how many I could line up before she noticed and came down Hulk-like on my feeble effort. Over and over this pattern ensued and became a game. Often, in my haste, I clumsily knocked them down myself or she’d throw tiles at the line until it curved smoothly into oblivion. This so resonates with life!

My NEW lesson: trying to set and accomplish goals as a mother with children (let alone little ones underfoot) can be a shaky if not downright doomed process. How can we remedy this reality to still seek out progress for ourselves and our families?

Your goal for patience could have some generous parameters—like a rating system instead of all-or-nothing thinking. Your training schedule needn’t be demolished when your baby is up in the night or your teen needs a late-night talk just with you. Maybe you can make it up later or differently. See the big picture instead of the immediate setback.

In life and in goals, the domino lesson can move us to really good places—sometimes slower, sometimes different, and possibly better than expected. Given the topples, the repetitive setting up for so many tasks, and the time it takes to line up our best intentions, we are probably progressing more than we realize—especially if you have a few little Incredible Hulks living at your house.

QUESTION: How can you adapt your goals to account for the reality of your current stage?

CHALLENGE: Build in some gaps and room for falling down in both your daily routines and the pursuit of your dreams.

Edited by Aubrey Degn and Sarah Monson.
Image from FreeDigitalPhotos/akeeris with graphics by Julie Finlayson.

I am the mom of 3 spunky girls who delight in fun…and mischief! Together with my “girl- trapped” husband (anyone with a first grader is familiar with that term!), we live near the mountains and love hiking, campfires, water, bike rides, and any other outside fun. When winter gets the best of us we snuggle up with books and get creative with projects. I love teaching, big salads, piano, check marks on lists, dabbling in craftiness, planning, and playing.