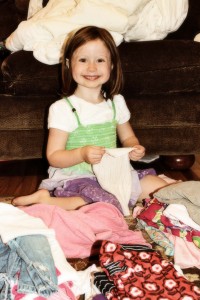 “See! This is fun right?” I looked at my four-year-old who was struggling with the arms of a shirt that were inside-out. I was attempting our first “folding clothes” party complete with Disney music and three full loads surrounding us on the floor. My two-year-old was working on the washcloths in between her sporadic jumps and leaps through the air. This is actually working, I thought to myself. We continued to fold for a few more minutes until my two-year-old lost interest entirely and refused to stay in the room. Then my four-year-old started to whine because she felt that she was given the most difficult things to fold. She sealed her unwillingness to fold anymore with a puckered lower lip and tightly folded arms. After feeling frustrated and defeated for a moment, I remembered that I had pulled out my camera at the beginning of the party to capture this fleeting moment of folding fun. I smiled to myself as I continued to fold alone. At least I had snapped the picture before the storm.

In a house with three girls, the oldest being a preschooler, emotions rise and fall like popping popcorn kernels. Everything will go smoothly for a minute or two until “pop!” and the storm hits. Oftentimes the “fun moments” are the fleeting ones that creep up on us and we must snatch a mental picture of them before they slip away. One of my best memories of this summer was watching my husband chase the girls out in the middle of a huge field somewhere outside of  Boise while we waited for AAA to refill our empty gas tank (we place the blame on an excellent book on tape). It didn’t matter that just before that moment the girls were whining for dinner and we were counting down the miles to the next big city. It didn’t matter that after that moment we had a major meltdown around 2:00 a.m. and an unexpected vomiting session around 4:00 a.m. In between it all, there was fun. Perhaps the fact that it took place after whining and before throwing up is what made it so special. 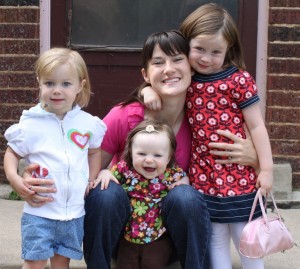 There are times when we plan a fun activity and it doesn’t always turn out fun. I recently took my girls out for ice cream, just for fun, and decided to take a picture to remember this time together. Literally a minute later, both girls were fighting over the last few bites in the shared cup, flinging bits of ice cream all over themselves and the table. As I carried my hysterical two-year-old out the door with my angry four-year-old in tow, I reminded myself that one day this would be a fun story to tell. And besides that I had captured the calm before the storm, once again, in my camera and in my mind before the popcorn started shooting at me from all sides. 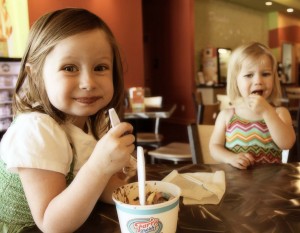 I hope to be more prepared each day to snatch the fun out of our daily activities. I found a definition of “fun” in a magazine that said, “Fun is an activity too often pushed aside for homework and lost-shoe hunting.” I beg to differ: fun can be found even in the simple and mundane. In fact, that seems to be when we need to find it the most.

QUESTION: What have been some small but fun times you have had with your family recently? What do you do to help create simple yet fun moments with the children?

CHALLENGE: Look for the fun in your daily routine. Recognize the small moments; capture them in your heart, camera or journal. Share them in the comments section for other moms to enjoy!

Janelle and her husband, David, are the parents of three girls, ages four, two, and nine months. Janelle earned a degree in English from Brigham Young University and while she enjoyed working as an editor for a small publishing company for about a year, she now gives her full time and energy to motherhood. She enjoys writing about the ups and downs of motherhood on her toddler activities blog Where Are My Mary Janes?, a blog based on the belief that "motherhood requires selflessness, but you still have to know who that self is." When Janelle heard about The Power of Moms, she knew that it was right down her alley. If she could learn to be more proficient and capable at anything, it would be her role as a mother.