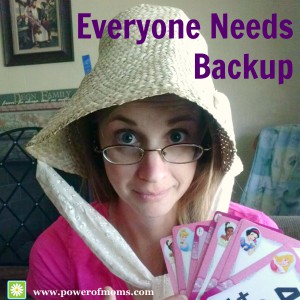 It’s been years since I saw a particular clip on one of those funniest home video programs, but I’ve never forgotten it. It shows a scene familiar to many parents: a crying toddler who refuses to go to sleep for his dad, until—and I don’t know what possessed him to think of it—the father dons a wig and tells the child to go to sleep–in a different voice. The child immediately lays down and stops crying. It’s hilarious! (By the way, I found a clip of the video here on YouTube.)

This clip highlights a fundamental principle of parenting: it is not uncommon for your child to behave better for someone else than they do for you.  We can all relate, right? Your child’s teacher raves about what a quiet, focused student your dear son is, and all you can think about is how he bounces off the walls at home and refuses to do his homework.  Or you spend half an hour begging, pleading, and threatening your daughter to brush her teeth, but when grandma comes over and asks, she skips off to the bathroom and completes the task in under five minutes.

The parenting experts will tell you that this is normal. Our children feel safe with us and can act out and express their true feelings and emotions. That’s fantastic, but it doesn’t change the fact that it can be utterly frustrating!

I’ve decided that I can either be discouraged by this phenomenon or—for lack of a better term—I can exploit it to my advantage! Batman had Robin and Han Solo had Chewbacca, so why couldn’t I have a backup? Everyone needs one sometimes, even mothers.  There are many different ways to accomplish this. Most of us have some sort of support structure we can turn to—spouses, grandparents, aunts, uncles, friends, and teachers. Do we utilize them enough? Do we give them opportunities to have a positive influence in our children’s lives and to help us with things we are struggling with?

I know one mom of a teenager who was battling to get her son to finish his Eagle Scout award. He had put in so much time and effort into the scouting program and was so close, but something about mom asking him to work on it made it utterly undesirable. So she called a neighbor, a man this son admired, and asked him to help her. This man went to her house, talked to her son, and gave him the motivation to get the award. And he did!

But what if you’re on your own? What if it’s bedtime and dad is gone and you’re ready to pull your hair out? In these situations, a little creativity and imagination can go a long way. It’s time to enlist the help of alternate personalities. Here are two of my children’s favorites:

The Robot: Mom goes into the bathroom and the cleaning robot comes out in her place. The robot scans each toy and tells the child where it belongs. You can watch me in action in this video (the robot part starts at 2:24).

Mrs. Higglebottom: Don’t ask where the name came from…I don’t know. This character was born out of summertime frustration. I really wanted my kids to practice writing and reading during the summer, but it was like pulling teeth. So, one day I put on my sun hat, pulled my hair back into a bun, and put on my glasses and my best Mary Poppins accent.  Mrs. Higglebottom came to tutor my kids and they absolutely loved her. They would beg me each day, “Is Mrs. Higglebottom coming today?! Guess what we did last time she came?” It was so funny to me that they enjoyed schoolwork when I put a costume on, but hey, whatever works.

In the end, it all comes down to finding the sidekick option that works best for you. It may mean putting aside your pride and asking others for help or making yourself look a little ridiculous. But I’m here to tell you that the benefits are worth it!

QUESTION: Think of a current situation with your children that is particularly frustrating. How can you apply the principle of “backup?”

CHALLENGE: When a challenging situation arises this week, swallow your pride and “phone a friend” or use your imagination with your situation to call in a backup.

Edited by Becky Fawcett and Sarah Monson.
Image from author with graphics by Anna Jenkins..
Originally published on June 30, 2015.