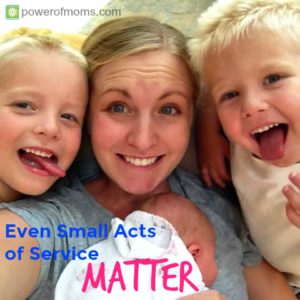 I was sitting on the tiled floor of the public bathroom when she walked in.

My daughter Charlotte was just two months old, lying next to me on the ground because there was nowhere else to put her. My three-year-old son, Graham, stood in front of me, visibly upset and wiping away tears from his red eyes with the back of his chubby fist. His pants were off to the side and his wet underwear was wadded in a ball with paper towels wrapped around them.

It had been a difficult day. I had run too many errands, taking care of things that couldn’t wait, regardless of the toll I could see it taking on my little children, especially Graham. We finally arrived at the library to get their promised books, but his frustration over being dragged from place to place was too much—he broke down.

His epic meltdown culminated in choking sobs and an accident right in the middle of the stacks of children’s books. I hastily asked a librarian for assistance, who put a trash can over the wet carpet and assured me I should go care for my son and let the janitorial staff clean up.

There we were, with Charlotte beginning to fuss in frustration at being on the cold tile floor, and Graham’s face still glistening in the aftermath of his breakdown. I was exhausted and mentally drained, trying to care for both kids and feeling like I wasn’t adequately caring for either.

Suddenly the door of the bathroom opened and a woman walked in and abruptly asked me if it was my son with blond hair and an orange coat out there. With a sinking heart, I affirmed that it was. She went on, “Well, I just have to say that he was riding the elevator by himself and I think that is completely unreasonable. He shouldn’t be out there bothering other people in the library unsupervised.”

I looked up from my spot on the ground feeling utterly demoralized and apologized for the inconvenience. I assured her that as soon as I could get my younger son dressed, I would go out and make sure that my older boy was off the elevator. “Well, he’s off now,” she said in a huff. “He went up and down and then went to the children’s area to play on the computer. But I felt like you should know what he has been doing without you being present.”

She left then, and I sat on the floor feeling a bit like I’d been sucker-punched while I was quite literally already down. Finally, after a few bewildered moments, I finished cleaning up Graham and getting him re-dressed, then picked up Charlotte and went out to the children’s section of the library where my six-year-old son, Colton, was still on the computer.

This particular trip to the library had been eventful enough, so I began the process of gathering our things and preparing the kids to leave. My bag was heavy. It held a few purchases I’d made during our errands, my baby supplies, and the books we’d checked out.

Graham was still upset and began another tantrum. I tried to explain that I couldn’t carry him, the bag, and Charlotte out the door and down the stairs to our car in the parking garage. He was beyond logic by that point and continued to wail, despite my best efforts to calm him. Finally in desperation, I asked a woman standing nearby if she would be willing to hold Charlotte for a minute. I thought if I could get my bag on and Graham in my arms before she handed Charlotte back, I might be able to hold everything until I got to the car.

Instead, she graciously offered to walk us to our car. She carried Charlotte for me, rubbing her back soothingly all the while. She grabbed a plastic sack and placed some of our library books into it, lightening my load so I could carry my bag and my son more easily.

As we walked, she quietly said she’d noticed how I’d kept calm while Graham was losing control and that I’d handled it well. Once we got to my car, she waited while I buckled Graham in, then handed Charlotte to me. When I thanked her for her help, she simply said it was her pleasure and walked back into the library.

With the kids buckled in and entertained by a book on CD, I let the story fade into a background murmur and closed my eyes to ponder for a moment. The juxtaposition of my experiences with the two women in the library was so clear and sharp. One woman saw me struggling and offered only judgement, leaving me feeling beaten down and alone. The other saw me struggling and stepped in to help in every way she could. Through her kind actions, soothing presence, and encouraging words, she lightened my burden and lifted my spirits.

I knew then and I know now which woman I want to emulate. Though it may have seemed like a small thing to her, just helping a stranger to her car, to me it was a powerful reminder of how much we need each other as women. I resolved to watch for opportunities to do the same for others, knowing first-hand how meaningful it can be. Through even the smallest acts of service, we can encourage and uplift each other in powerful and impactful ways.

QUESTION: What small acts of kindness have others performed for you that have impacted your life? How can you try to do the same for others?

CHALLENGE: This week, look for ways you can help others and follow through when you see opportunities to serve. Even small actions like opening a door or taking a grocery cart back could be just the boost someone needs.

Edited by Nollie Haws and Kimberly Price.
Image provided by the author; graphics by Anna Jenkins.

Deborah is married to her best friend Dave, and together they have two active -- okay, wild! -- young sons and a beautiful baby daughter who constantly keep her on her toes. While she always hoped to be a mother, she never realized what an adventure every day would be with young children. Somehow her professional training as a CPA did not prepare her for either the chaos or the beauty of daily life as a mother, yet she considers it a great blessing to be home with her children. Motherhood has stretched her and helped her grow in ways she had never imagined, and she is grateful for this community of mothers who are also trying to learn and grow in deliberate, meaningful ways. Her family are her best friends and her companions in all her best adventures, big and small. She loves going with them to explore outdoors, trying to improve her photography skills, reading, sneaking handfuls of chocolate chips while hiding in her pantry, playing the piano, and she is trying to convince herself she loves exercising. She also loves documenting her personal thoughts and her family's adventures on her blog Nash Ramblings .