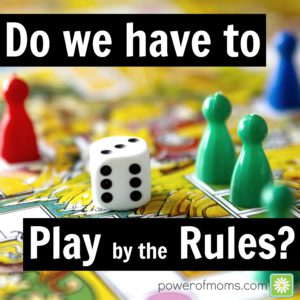 I recently played a game of Old Maid with my youngest daughter. As we began she asked, “Can we take out the Old Maid?” Before responding, I thought back on other times I had played this game with my children.

When my first child was young and we played Old Maid together, she could not tolerate holding the Old Maid card. She would squirm and pout and try to force me to take it. I wanted her to play by the rules. I wanted her to understand the importance of fairness, and I wanted her to learn it was okay if she didn’t win.

If she was holding the Old Maid as the game got closer to ending, she would start crying or quit the game all together. I felt angry and frustrated when she acted this way. Why couldn’t she handle holding that card?

Truthfully, her reaction made me want to dig in and make her experience the loss so that she could learn how to deal with it. But trying to do so only led to a battle for control that left us both angry and unhappy with each other.

The more I thought about it, the more I realized that I needed to reconsider my purpose in playing games with my children. Was the point to spend enjoyable leisure time with them? Or was I trying to teach them the rules of the game? Was it really the appropriate and necessary time to teach lessons about fairness and good sportsmanship?

I reviewed some parenting books and past notes I had made and remembered that children ages two to seven are not developmentally ready to master the difficult concepts of rules and fairness. Their needs at this age have little do with learning the correct way to play a certain game. What they do need is to spend time with and have attention from their parents, to bond and become closer with them, and to learn appropriate social skills through observing and interacting with their parents.

This insight shed a whole new light on playing games with my children. It dawned on me that when viewed from this perspective, the rules to a game become suggestions instead of regulations. I could adjust the game to the needs of my children. After all, the rules of all games are arbitrary. Someone made them up, and that person could just as easily have said something different. Playing Old Maid without the Old Maid card is simply playing a different game. If that’s more fun for my child, why not play it that way?

There was a part of me that wanted to say, “Children have to learn to follow the rules because that’s how the real world works.” But again, the experts would remind me that this logic assumes children are little adults, and it disregards their developmental changes as they grow.

As children get older, they naturally come to see the importance of playing by the rules. Somewhere in their elementary school years—around the time children can read and play games independently—they start to be more aware of their peers and care more about getting along with them. This leads to a desire to be fair and an understanding of how important it is for everyone to follow the same rules. Their cognitive abilities mature enough to see that rules are important in social situations.

I began to see that I needed to approach playing games with young children differently. My focus should be on having a good time with my daughter. It didn’t matter what game we were playing or what rules we played by. 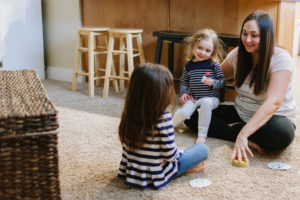 So when my youngest daughter asked, “Can we take out the Old Maid?” I let her. The cards we were playing with happened to have different careers on them (Fireman Fred, Stanley Scientist, etc.), so we talked about the people and their jobs. We chatted and had fun together, laid down our matches, and counted who got the most.

Based on this experience, I began to modify the way we played different games depending on the age of the child. For example, when I play Memory with a very young child, I start by telling her to turn over two cards and leave them turned over, enabling us to see the pictures. As more and more cards get turned over, she can find matches and take them off the board. As we play, my daughter learns about social interaction, turn-taking, awareness, and listening.

Adapting a game to fit a child’s needs is one thing, but when she wants to change the rules in the middle of the game (because she is losing or didn’t get what she wanted), it can be aggravating! However, I try to be flexible. I remember that there is very little point to rigidly following the rules when it’s just the two of us playing. The younger the child, the less importance I put on sticking to the rules. I try to have the philosophy of, “Sure, you can give that card back. I’m just here to play with you, so play however you want to.”

As my children get older, we play versions of each game that are closer and closer to the actual rules. I tell them there are a lot of different ways to play games—some ways are for younger kids and some ways are for older kids.

I try to put less emphasis on winning, losing, and keeping score and more on the fun we are having. I want to model an easy-going and generous approach to playing games, hoping my daughters will follow my example when playing with other children.

Playing by the rules of a game is certainly not wrong or bad for your children. But I found that adapting the rules to my children’s developmental age and needs made the time we spent together much more pleasant. It was hard at first to not feel that it was my duty to teach them about rules and fairness, but once I changed my mindset and remembered my true purpose in playing the game, I found it easier to let go of the rules and just enjoy the interaction.

QUESTION: How do you feel about changing the way you play a game to fit the needs of your child?

CHALLENGE: Next time you play a game with your child, think about his or her developmental stage and evaluate how strict you need to be in sticking to the rules.