My in-laws have had a photo hanging in their house for years. I fell in love with it long before I had children. Once I had children, it was a photo I longed to re-create. There was something about the photo I adored. Perhaps it was the black and white. (Back in the day when black and white was cheaper and not done merely for “effect.”) Or maybe it was the nostalgic outfits and hair cuts from yesteryear I loved. Or perhaps it was simply the happy family persona the photo seemed to claim. 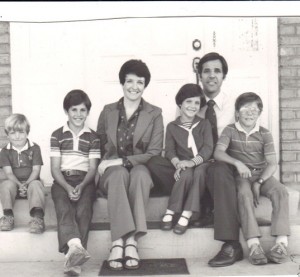 One sunny Sunday afternoon, I recreated my own version of that 30-year-old classic family photo. It wasn’t at all planned, in fact it was a sheer accident. All I was trying to do was capture a nice photo of my five children in patriotic outfits on a Sunday afternoon. Trouble is, it was very poor timing. My husband was gone, it was naptime, no one had eaten anything since breakfast four hours previously, and apparently no one besides me was in the mood for a photo shoot.

Despite the lack of cooperation from my children, I continued to snap photos. I was determined to get those coordinated red, white and blue outfits captured. Before long, I was pretty irritated by the tears and gave up the photo shoot. I put away the camera until a couple of hours later when I decided to upload the pictures to my computer.

The photos I took were not exactly what I originally planned, but within minutes, I forgot my previous photo shoot expectations when I saw this photo. 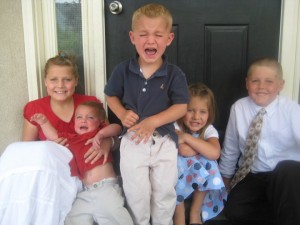 I fell in love with it immediately. It showed the reality of my life more than five faces smiling back at me ever could. It is now a classic family photo that has been enlarged to a poster-size print and hangs in our front entry. (Printed in black and white, I might add.) I think it is my favorite photo of my five children, and quite possibly, my favorite photo of all-time, with my husband’s family photo a close second.

I’m beginning to realize it probably wasn’t simply my husband’s family photo I’ve adored for all these years, but the idea it portrayed. Did you get that? The idea it PORTRAYED.  I know I don’t have to have a conversation with my mother-in-law to find out that my family photo is probably more indicative of her child-raising years than her photo is.

Regardless, I still love the classic 1981 family photo. I always will. It captures a young, ambitious, life-still-ahead of them, loving family. It personifies every part of child-raising that so many dream of: happy, content children, smiling and proud parents in front of the family home.  Really the only thing missing is a white picket fence and a dog.

I dearly love my own photo every bit as much, maybe even more. It shows no proud parents smiling, but instead has two screaming children, one fake smile, one attempt to talk, and perhaps one almost-genuine smile.

I could have thrown down the camera that Sunday afternoon and walked away. I could have shed tears right along with my two little boys. But I didn’t. I kept pushing the camera button, despite the obvious opposition. I could have been disappointed I didn’t have any “picture-perfect” photos. But instead, what do I have? I have a wonderful, accurate portrayal of my life that I will treasure for years. I’m learning it isn’t about getting what you want; it is about wanting what you have. 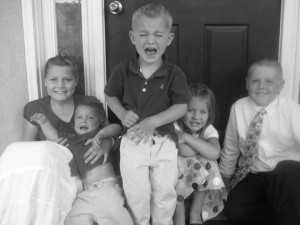 CHALLENGE: Make a list of all the things you love about your life currently.

Tiffany Sowby's passionate dream from childhood-to grow up and be a mother-has come true, as she is now the mother of five children, ranging in age from five to fifteen. Though the realities of motherhood are far from dreamy, Tiffany does her best to keep her passion for motherhood alive by appreciating, recognizing and finding joy in the little things in life.