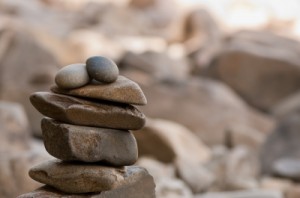 How often do you find yourself feeling out of balance? It feels as though there are so many things in your envelope that you just can’t cram in one more thing, but somehow you manage to do it anyway. Your life is full of “stuff” and sometimes you feel that you are in the thick of thin things. The “urgent” seems to force out the “important” but you just can’t figure out how to make things change. As my friend Barbara Bowen explains it, mothers often feel like the guy in the circus who is spinning plates. He starts with one and then adds more and more, much to the awe of the spectators. But how can he possibly keep all those plates spinning for very long? How many more plates are you going to be able to spin before you crash?

I must admit that my husband is the one who has really helped me find more balance. He’s the king of “systems”. He figured out two secrets many years ago that have helped immensely with my peace of mind with nine kids and all their plates to spin along with all the other demands on my life, including him! These little secrets help you feel happy at the end of the day, even if you haven’t accomplished much on your list of things to do and also helps you realize that you’re having more fun than you thought you were!

The first secret involves drawing three lines at the top of your daily planner page or just on a blank piece of paper if you don’t do planners (in our surveys, we’ve found that about fifty percent of parents use planners and the other fifty percent don’t, so you’re good either way). Write one thing on the first line that you are going to do for yourself that day. It may be just reading the introduction of the book you’ve been dying to get to for the past month. It could be making time to exercise for 15 minutes or writing a letter you’ve been procrastinating so you can get if off your mind.

On the second line write just one thing that you want (not need) to do for someone in your family…could be a child, a spouse or your mother. Just some little thing that will make a difference like complimenting a child on a job well done, calling your mom to see if she’s okay or just telling your husband how much you love him for sacrificing something he wanted to do to be with the family.

Write something you want to do (not need to do) in “your work” on the third line. If your work is at home, that could be cleaning out the “junk drawer” that drives you crazy every time you open it. If you’re at an office, you could send a note to a someone to tell them how much you appreciate them. Your world that day may be serving a friend or neighbor. Just choose one thing!

Determine that even if doing what you have written on those three lines is the only thing you accomplish that day, your day has been a success! You feel a little more balanced because even though those three little things probably won’t take equal time to accomplish as the things that you have to do, you will love accomplishing just three things that you really want to do rather than feeling controlled by the things you have to do. Doing those three things every day is also important because they usually have to do with relationships…with yourself, your family and your work. They are things that keep you thinking about the most important things in your life.

The second secret involves something we call serendipity. The definition of serendipity is “Through awareness and sagacity, finding something good while looking for something else.” It’s like a game that you can play every day. First write down or mentally note the things you would like to accomplish that day. BUT be ready for the unexpected. Serendipity usually happens because of a crisis or a when you are least expecting it! It might be just getting a great idea because of something that one of your kids said or did. It might be just taking a minute to enjoy a gorgeous sunset. It might be getting a call from a long lost friend, just when you thought it was so important to accomplish something else. An annoying interruption by a child becomes an opportunity!

My Richard has written a whole book on this topic called Spiritual Serendipity which, simply put, says that the best things in life usually aren’t planned. Every challenge has “a serendipity”. If you have a flat tire on the freeway with the soccer team in tow and the kind person is someone who inspired you to return the favor some day…that‘s a serendipity. If you are watching for serendipities, they happen every day AND it makes life so much more fun! When you get really good at looking for serendipity, instead of rolling over in the morning with your first thought being a heavy, “What do I have to do today?”, you might be able to roll over and think, “I wonder what’s going to happen to me today?” That makes life more of an adventure than drudgery.

It takes time to develop these habits but it’s worth persistence! Good luck with your short list of three and finding serendipity in your life. Though you still have to spin those plates, you’ll find that you feel more balanced and that you’re having a lot more fun that you thought you were!

QUESTION: What helps you maintain balance between the things that pull you in different directions?

CHALLENGE: If you have a simple “system” or mode of thinking, share it below!