I am not naturally organized. If I do not write it down, I will not remember. Most “systems” I start systematically fail. My children rarely complete sticker charts because I don’t remember to give them the stickers they earn. Any schedule I make lasts about three months, tops. And the summer reading program at the library? Forget about it.

Yet I forge ahead, trying to give my children the benefits of organization and order. In this area, I am truly a deliberate mother because it takes effort and planning to make it happen. I am happier when we have a predictable schedule. So are the kids. I think it is important for my children to be working toward goals. I want them to have responsibilities in the home. Over the years, with a lot of trial and error along the way, I have stumbled upon three systems that actually work for me and my family. 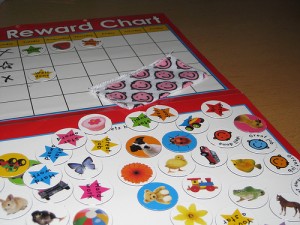 I tried sticker charts for the sake of sticker charts. The reward was completing the chart. My daughter cried because she couldn’t have the sticker for herself, and my son figured out that it was just a piece of paper.

I added the Prize Basket. When the kids completed a row on their sticker chart, they could choose a prize from the basket. They worked hard to earn the prizes they wanted, and then they quit. They didn’t care about the rest.

So I then let them choose the prizes themselves. I found myself throwing away the prizes even as they were earning similar prizes from the basket. We were overrun with little rubber lizards!

Eventually I was inspired. I let the kids choose their own rewards for achieving a goal. The rewards are rarely toys. Right now, one child likes to choose the menu for dinner. Another wants to visit a museum. The third wants us to watch her perform a dance show on a large piece of cardboard she calls a stage. They have chosen camping trips, art projects, and dinner dates. I love the idea of earning experiences instead of rubber lizards destined for the landfill. I still use sticker charts when they help us track a goal, but, mercifully, they aren’t always necessary.

2. Variable Chores on the Daily Checklist 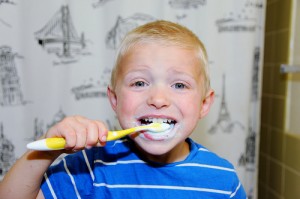 My biggest problem with chore charts is that they never change. The same five jobs get done every day, and none of the others are completed. I stopped using them long ago and just assigned chores to the kids as the chores needed to be done. I wanted more though; I wanted my children to understand which responsibilities they had to tend to each day without me having to tell them. We eventually came up with a checklist.

I assign three jobs each day based on what needs to get done. When the kids aren’t in school, I assign homework, too.

The kids do their checklists daily because we don’t turn on the TV or computer until they are done. They also get paid for doing all ten items before 10 am.

This system gives our days a predictable flow but is still flexible enough to allow for changing priorities, skill levels, and schedules. It also ensures that my kids do something constructive with their time every day and gives me an alternative to suggest when they want TV-time all morning.

At least once a year, I write down a weekly schedule for the kids who aren’t in school. It usually includes story time, a play date or two, quiet time, chore time, park days, exercise time for me, etc. Then I realize that I left out pre-school, or one of the children starts napping at a different time or becomes terrified of story time, and my meticulously planned schedule is ruined.

It turns out that working in three-month segments works for us. So, every quarter, I revamp the schedule, reward system, cleaning plan, and goals. Working with a shorter focus has had surprising benefits: 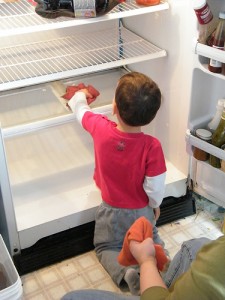 I admit, when I say “quarterly,” I mean “every three or four months or so.” I try to be aware of when things move toward chaos, but sometimes I sit frustrated at bedtime and realize that we need to reorganize because we aren’t following the plan anymore. The good news is that changing the plan IS the plan! There is no reason to feel guilty that the old plan isn’t working, because it was temporary by design.

I had my fourth baby in May, less than two weeks before school got out for the summer. The timing of jumping from three children to four made my knees quake. I would have all four children, all day, every day, for more than two months.

We followed the checklist religiously. The house stayed reasonably clean. The kids kept up with summer homework and worked on the skills they were learning at the end of the school year. My two-year-old was read to every day. By the end of the summer, the system started falling apart. My son met his big goal that he set for himself during the summer, and we delayed in setting a new goal. The kids were earning their “early completion” bonus less and less because their piggy banks were stuffed with coins.

It was okay, though. It got us through the summer with the new baby and some sanity intact. We enjoyed the last lazy days with no schedule, and when school started again, we started over.

The most important part of organization is finding the system that works with your strengths. In my case, it took several years to figure out how to run a tight ship, or at least a ship that isn’t leaking too much. I’m still trying to find the perfect solutions to keep my family somewhat organized on a daily basis, and that is enough.

QUESTION: What are your strengths? How can you organize and be motivated in a way that takes advantage of your personality?

CHALLENGE: Try a new organization or motivational system for a short time, then decide what you like or don’t like about it. Use what you learn to make your system better.

Emily is mother to four children--two boys and two girls. She also runs a very small CPA firm from home. She loves that she is able to spend her days at home with her kids. Her favorite parts of being a mom are baking with the kids and playing outside when the weather is nice. Her least favorite part is trying to keep the house clean. When Emily grows up, she wants to be a writer, or maybe a ballerina.