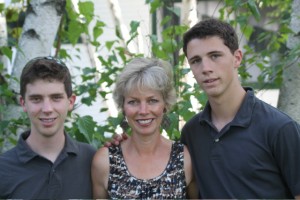 They grow up. They leave home. And then, of course, they come back. They return bearing bags of dirty laundry, stray socks, T-shirts you’ve never seen before, strange cords for charging various digital devices. They are different, in a way you can’t put your finger on. Taller, yes, but that’s not quite it. Bigger in some other way; deeper, with knowledge that won’t be shared with you. They are clean shaven (because they know you love that). They wear their hair short by choice — now that you’re no longer the one saying, “You need a haircut.”

They use words like “fundamentalist” and “metaphorical” and are eager to test your knowledge on constitutional amendments and C.S. Lewis. They want to know your thoughts about original sin, and whether you can still scan a line of poetry. They realize that you will be of no help on the paper they have to write analyzing the thematic and rhythmic structure of Gershwin’s “An American in Paris.”

They are hungry. Really, really hungry. You go through a dozen eggs a day, a gallon of orange juice, a gallon of milk. They spend hours on Facebook. Their rooms, pristinely vacant these last months, are instantly in shambles. You are not the least bit tempted to pick their jeans up off the floor. They want you to watch clips of the Daily Show at midnight, and you do, even though your bedtime lately has been closer to 10:30 than 12. (Well, admit it, you’re often in bed even earlier than that.) They ask for the car keys, and you’re happy to hand them over.

When you say, “Be home for dinner,” they don’t even protest. (They appreciate your cooking!) When they’re running late, they text, to let you know. Their friends come over. . .and seem genuinely happy to see you — eager to talk, hang around in the kitchen, tell you about their lives as they eat your food. They say “thank you” for the meal and put their dishes into the dishwasher without being asked. You hear the thwack of ping pong balls in the basement, cries of victory, deep laughter. You don’t tell anyone what time to go to bed, or worry about what they’re doing down there after you’re asleep. You wake up at four, in a dark and silent house, and allow your thoughts to drift. The very thing you once took for granted — two boys asleep in their own beds down the hall — has become rare.

You used to think that you would never get “your” life back, the one where you got to choose how to spend your own time, or what to watch on TV, or how loud the music in the car should be. But of course, it’s been your life all along, and those little boys were always on their way out the door, growing up and growing away from you, even as they were pressing your buttons and driving you nuts and forgetting their homework and not brushing their teeth. You wonder if you paid enough attention, if you cherished those days enough, if you ever really grasped the fact that your life was always in the process of turning into something else. You don’t want to be too hard on that younger, more impatient self. But you are perhaps a little wiser now, more attuned to the moment, how precious it is. And so you don’t mind being awake, listening to your husband’s gentle breath rising and falling beside you, the dog’s soft snore, the wind tossing the bare branches outside the window. Everyone is home, glad to be here. You give thanks for that.

QUESTION: Which moments with your children do you wish you could relive?  What do you miss (that you didn’t necessarily know you’d miss)?

CHALLENGE: Pay close attention to the “moments” your family is experiencing this month–realizing how precious and fleeting they really are.

A graduate of Smith College, Katrina Kenison spent many years working in publishing, first as an in-house editor at Houghton Mifflin Company in New Haven, New York, and Boston, and then, from 1990 through 2006, working from home as the series editor of The Best American Short Stories.  She also co-edited, with John Updike, The Best American Short Stories of the Century. She is the author of Mitten Strings for God: Reflections for Mothers in a Hurry.  With her yoga teacher, Rolf Gates, she wrote Meditations from the Mat: Daily Reflections on the Path of Yoga, and with Kathleen Hirsch she co-edited an anthology of short stories about motherhood, Mothers: Twenty Stories of Contemporary Motherhood. Her writing has appeared in O The Oprah Magazine, Real Simple, Country Journal, Family Circle, Redbook, and other publications. Katrina lives in the New Hampshire countryside with her husband, sons, and their faithful border collie, Gracie. You also might know Katrina from her incredible YouTube Video featuring her book The Gift of an Ordinary Day.