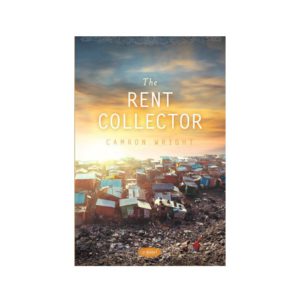 The Rent Collector is about a family who lives in a waste dump called Stung Meanchey in Cambodia. The wife and mother in the story, Sang Ly, learns to read and write, taking lessons from a surprising source. The overall message centers on finding hope and redemption in unlikely places. The characters and locations are real, but Camron Wright has written a fictional story based on the simple question, “What if someone in Stung Meanchey learned to read and write?”

How this book made an impact in my life, especially as a mother:

My sister and I were recently bemoaning the lack of mothers depicted as heroines on the world stage. We discussed books, movies, TV shows, and other media and found ourselves asking, “Where are all the mothers?”

Within the same week of that conversation I picked up this book for book club. I had no idea what it was about, and to my surprise it ended up filling that need! Sang Ly is a mom who wants to learn to read to give her son a better life. She defies the odds; she dreams big in a place where one would think hope had been buried beneath the rubble. Following her journey left me very inspired. She is the kind of heroine who deserves a spot on the world’s stage.

There’s a quote from Buddha at the beginning of the book that says, “When you realize how perfect everything is you will tilt back and laugh at the sky.” I don’t want to give any spoilers, so I’ll just say that the book comes full circle to remind us that happiness does not come from our possessions but from our connections to the people we love. This isn’t a new theme, but it’s always a good one to revisit. It seems to be human tendency to forget this at least once in awhile. I was reminded that if such happiness can be found for this mother in Cambodia, surely I can feel it a little deeper too.

QUESTION: Have you had any experiences that teach you that happiness comes more from your outlook and your relationships than your circumstances or material possessions?