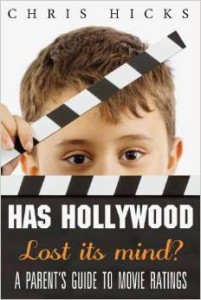 Title: Has Hollywood Lost Its Mind?: A Parent’s Guide to Movie Ratings

Chris Hicks has been a movie reviewer for both newspaper and radio for over 30 years. He has been passionate about movies from every genre since his childhood, and now he lifts the curtain of movie ratings for confused parents and viewers everywhere. He explains the history and process of getting a movie rated, as well as the politics and profit strategies at work. Hicks also addresses common misconceptions that both producers and parents may have about the implied quality of a movie, the box office draw that certain ratings bring, or the content that may be in them.

But what is most obvious in this book is the author’s passionate challenge to both Hollywood and parents to protect childhood by making and viewing movies wisely. One of my favorite lines in the book is when he challenges a common justification for inappropriate items in movies:

“If you call them on it [gratuitous sex, violence, and language], filmmakers become defensive, justifying such content by arguing that children are exposed to it every day in one form or another-even in elementary school yards.  But if you talk to teachers, or even children themselves, they will tell you that when it is brought to the school yard it has often come from a movie.” (pg. 182)

I really enjoyed the author’s explanation of how a movie gets its rating, and why a movie might have a rating that I don’t agree with. Movies go before a board of parents who decide if it is suitable for children or not, and then gives an appropriate rating. Ratings are often inconsistent, however (for example, G rated  “Green Berets” has intense war violence and language). One reason for the inconsistency is that the board switches out every 2-3 years. In addition, the ratings system has evolved over time (a G in the 60’s for example had different qualifications than a G now). Finally, current movie producers often aim for a PG-13 rating–no matter the target audience. A movie can appeal a rating from an R to a PG-13, without changing any content. Often this appeal gets approved. I appreciated the myriad examples of movies both old and new to illustrate the history of the current rating system–it helped me understand it all so much better.

How This Book Made an Impact In My Life, Especially as a Mother:

I consider myself a pretty careful parent when it comes to movies, but this book has really educated me about the ratings system and made me more aware of what we watch. I have five children: three older and two younger. Often the younger kids end up watching movies that the older kids are interested in. This book has made me re-examine the movies that all of the children, but most especially the younger ones, are exposed to. Before, I thought, “Oh, it’s not that bad–especially compared to what So-and-So let’s her kids watch,” or “This is a great movie with a great message for older kids,” but now I am asking, “Is this appropriate for young children?” or “Is this designed with young children in mind?” Though subtle, this change of perspective has prompted changes in our family already.

Chris Hicks still loves movies. But he recognizes the negative content and impact movies can have and wants to empower parents like you and me. To do this, he created a list of online resources at the back of the book to help parents research a movie’s content on their own to see if it will be appropriate for their family. He also includes a list of lesser known but quality films that could facilitate many fun (and appropriate) family movie nights.

Jen is a homeschooling mom of one overly teased girl and four rowdy, teasing boys. She is married to an incredible man who bears an uncanny resemblance to Abraham Lincoln both in appearance and goodness. She is passionate about personal development, education, and dark chocolate. Her goal is to help each of her children find their passions early in life and be kind, well-read, thinking individuals who contribute. She is amazed at how much raising children is really just learning to be your best self in many different ways. Her kids think she has a long way to go, but she tries her best. And then tries again. And then goes and eats chocolate.