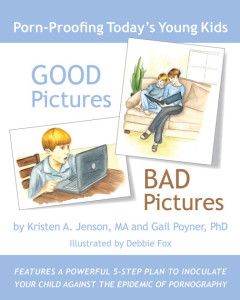 Have You Talked with Your Children About Pornography?

The holidays are upon us. Wish lists are being scribbled out on pieces of paper, kids are mentioning left and right what they’d like from Santa, Mom, and Dad. No doubt smart phones, tablets, and other mobile devices are at the top of many lists.

While no time ever seems like a good time to talk about pornography, I think now, is actually the perfect time. Especially as we are considering what to buy for Christmas. Children will be home over the holiday break. And if we choose, we can make time to sit down with them and discuss internet usage, family rules, and… what to do when they come across pornography.

No one likes to talk about pornography.

No one wants to talk about pornography.

But it’s a dialogue we need to have with our children. Earlier than we may think.

Did you know the most common age for kids to begin looking at pornography is between 7 and 12? Many American children begin viewing hard-core internet pornography at the age of seven and even younger, long before most parents consider discussing the dangers (xi).

Pornography isn’t what it used to be when we were children. It is much more deviant, harmful, and often depicts rape. Did you know 90% of internet pornography portrays violence against women?

Pornography is easily accessible from any internet-enabled device. It’s anonymous. It’s affordable (90% view it for free), and even if your child doesn’t own a smart phone, they likely have friends who do.

In recent years, the explosion of pornography has felt like a black mass of tar hanging out in some distant corner of my world. I know it’s there. I know it would be easy to step into, even by accident. So I don’t go anywhere near it.

But when it comes to my children, I have real concerns. How will I make sure they don’t get caught in its pernicious trap? How can I teach them their brain is the very best filter? Since it is becoming a matter of when, not if they are going to see it, how will I help them get those images out of their mind and ensure pornography doesn’t become a habit?

These questions have left me feeling somewhat discouraged, worried, and even fearful.

Ignorance is not Bliss

Three years ago, The LDS Church News printed the following in an editorial,

“Few informed people expect any child to grow toward adulthood without viewing lewd images. The days when parents could avoid the subject [of pornography] in the hope of not fostering curiosity are gone. Indeed, avoiding the subject has brought with it a generation of addiction.”

I am an active member of my church. I have a strong sense for what is right and wrong. And I am doing all I can to teach my five young children to make good choices – to turn away from anything that will harm them physically or spiritually. But I have been surprised again again by good people, even friends, who have lost themselves, their children, or their marriages to pornography.

I have read articles about filters, helpful talking points, and the dangers of pornography. Still, I have come away from the topic feeling helpless and unarmed. Unsure as to how my husband and I can prepare our children to fight the insidious nature of pornography and help them navigate the rapidly increasing demand for internet use among young children. I have wanted to talk to my kids about pornography, but I had no real tools to offer them.

Help is on the Way

Then I received an email from Kristen Jenson, author of Good Pictures Bad Pictures. She had read an article I wrote a few years ago about the impact of images on our brain and wondered if I’d be willing to review her book. She told me the premise of it and why she had written it.

And within 24 hours of reading it, I used Jenson’s 5-step plan with my oldest daughter who had seen a disturbing commercial for a horror movie in the middle of a football game on daytime television.

We discussed what she could do next time she saw an image she didn’t like or knew was bad. 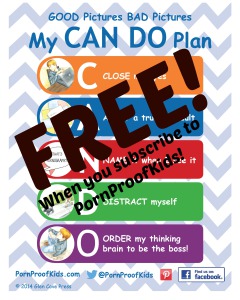 First, Close her eyes. Time is of the essence. The longer one is exposed to an image, the harder it is to forget it. Second, Alert a trusted adult. Third, Name it. Call it what it is: pornography. Fourth, Distract her mind. Sing a song, read a good book, recite a scripture or a poem. And last, Order her thinking brain to be in charge of her feeling brain (43).

CAN DO™ is the acronym for the five steps. Easy to memorize and understand.

Good Pictures Bad Pictures goes through each of these steps in detail, explaining the neurophysiology behind each.

It teaches with simplicity, that we have two brains. A thinking brain (prefrontal cortex) where we make decisions and weigh things morally. And a feeling brain (limbic system), which is driven by needs, feelings, and chemicals.

It teaches children (and parents too) that we can train our thinking brains to be stronger than our feeling brains.

This Book will Empower Your Family

Jenson and Poyner’s book resolved my feelings of fear connected with this difficult subject, and replaced them with a feeling of empowerment. For the first time, I feel confident talking about pornography with my kids. Wherever they go now, with or without me, I know they have tools to combat its influence.

Since then I have read the book with all three of my daughters, ages 7-9. And I plan to simplify it slightly to teach my twin boys, age 5. It is not necessary to have “the sex talk” before reading the book. Subject matter is presented in clear, tasteful ways, making hard topics accessible and understandable for young children.

Good Pictures Bad Pictures is a read-aloud book about a mom and a dad who work together to educate their son about pornography. A boy sits down with his mother to look at a family album of pictures. The mother mentions that these are good pictures. “They remind us of how important our family and friends are.” Then she says to her son. “Did you know there are bad pictures too?” (1).

That question begins the discussion of pornography. How to define it. Where he is most likely to see it. Why it is so addicting (more so than drugs and alcohol). And why it will actually damage his brain, his spirit, and his relationships with others.

A Child’s Brain is Especially Vulnerable

Here are a few true stories that spurred Jenson to write the book.

A seven-year-old boy was shown a pornographic magazine by his older cousins. After that shocking initial exposure, he felt compelled to seek out more nude pictures though he knew nothing about sex. Later, the internet proved a slippery slope to decades of addiction (xi).

These examples make my stomach churn. I don’t even like including them here. But before we begin to think something like this could never happen to us, or to our child, we would be wise to admit, it could happen to us.

But I believe we can curb that initial exposure if our children have tools and a plan for how they will react. Additionally, they need a parent who has calmly discussed the issue with them and can now be their ally.

Jenson calls this porn-proofing our kids.

“When it comes to kids and pornography, ignorance is risk. We live in a hyper-sexualized culture, so raising kids with sexual integrity requires early warning. Why? A child’s brain is more vulnerable because it rapidly forms neural connections. Viewing pornography can reprogram a child’s brain and initiate an addiction that is often harder to overcome than drugs and alcohol” (xii).

Jenson and Poyner describe pornography as a “sinister counterfeit” – something that teaches kids that sex is a self-gratifying and often violent diversion, instead of a way to build a loving committed relationship. Watch this video to see illustrations from the book and hear Jenson talk about its content.

Jenson and Poyner’s  message is one of prevention.

In a recent email, Jenson shared this insightful comment with me,

“We need to get in early enough with young kids to make a difference in their attitudes and to arm them with a strong spiritual and cognitive defense. If we want our children to love good books, we make sure they learn the cognitive skill of reading so they can access and benefit from those reads. In the same vein, if we want our children to stay pure and free from pornography, we must teach them the cognitive skill of using their thinking brain to reject porn in order to achieve that spiritual goal. Staying free from pornography is much harder now than it was five years ago. We’ve got to give kids actual tools then can use to defend themselves.”

Good Pictures Bad Pictures is the kind of gift that will keep on giving. For generations.

In the Spirit of Giving

With Christmas just around the corner, you might be interested to know that Jenson and Poyner, with all their knowledge and experience, do not recommend giving kids their own mobile device. They urge parents to give their children access to a mobile device they have purchased for the family where parents retain ownership and passwords.

You may want to consider giving the gift of this book. To children, grandchildren, or friends.

Jenson is offering readers who purchase the book a $5 discount code through December 25th.

I am so grateful to Jenson and Poyner, for their hours of research, their motivation, and their committed dedication to fighting pornography. They have created a comfortable way for me to talk about it with my children.

I don’t feel afraid anymore. I feel equipped and armed. And so do my children.

Jenson’s blog, pornproofkids.com, is a tremendous resource. It offers all kinds of ideas on strengthening internal filters, children’s rights, how pornography can hurt the brain, and how you can protect your child’s digital footprint.

Jenson has a bachelor’s degree in English Literature, a master’s degree in Organizational Communication, and is a mother of three.

Poyner is a licensed psychologist, mother of six, and grandmother to fourteen. In addition to running her own therapy services, she provides mental health services for disaster victims.

Kristen Jensen is offering FIVE copies of Good Pictures Bad Pictures to members of the Power of Moms community! To enter, please leave a comment below. The contest closes on December 9. (Giveaway limited to those in the continental US, Europe, and the UK.)