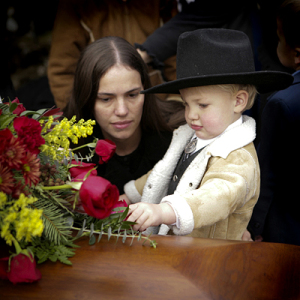 This article was originally published on June 14, 2010.

When Aaron and I were married in August 2002, our hopes and dreams of starting a family felt so close and we started trying to have a baby right away. After a few disappointing years, loads of tests and surgery… in March 2005, we were finally pregnant because of the miracle of artificial insemination. We were thrilled and so excited to be parents. That December, Aaron Jr. was born and our family was finally growing. He was a joy in our home and we adored him. Nearly two years later, after trying to get pregnant again, even through some failed attempts at artificial insemination, we were just two weeks away from attempting the procedure again when my husband Aaron, very unexpectedly, passed away on November 29, 2007. We were both just 30 years old.

Without warning, my best friend and the father of my child was gone. Our lives were shattered and the pain and grief were almost unbearable. Two days after Aaron passed away, we celebrated Aaron Jr’s second birthday. Then three days after that, we celebrated Aaron’s life at his funeral service. I don’t know if Aaron Jr knew about what was going on that day. He has always been the happiest and most cheerful child I have ever known, but in those days, he was still cheerful, but he also seemed a little disconnected and a little more somber. The day of the funeral, I was still in shock. I still could not believe that Aaron was gone and that my life had come to this… a widow at age 30, the ‘single’ mother of a little boy who didn’t get to grow up knowing his father. I felt completely empty and I no longer felt complete. I felt very much alone and it was difficult to find joy each day. The world kept turning somehow, but I didn’t feel like I was living life with everyone else. I felt like I was standing still watching life go on around me. I didn’t know how to continue without Aaron. In this photo at the funeral with the casket, the looks on our faces say it all. The shock of it all makes me look completely stoic… and I just felt entirely broken. 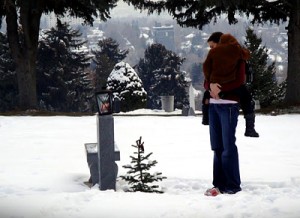 As days turned into weeks and weeks turned into months, Aaron Jr and I tried to find our new normal and to find joy in the days that seemed to feel like anything but normal. We turned to the Lord and found peace and comfort. I looked to my son and found joy. I made a decision that if I didn’t want to live for myself, I would surely live for my son. And by living for my son, I learned again what life is all about… achieving true joy throughout our journey. Aaron Jr is one of my heroes. If it hadn’t been for him, I would not have found my smile and my laughter as quickly as I did. My child was strong and cheerful when I felt like I couldn’t be, and yet, because he needed me… I was given strength that was not my own in order to continue being the mother I hoped to be. 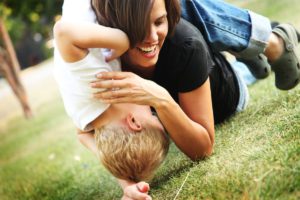 In the past two and a half years, Aaron Jr and I have tried to find joy in our days even through the grief of missing Aaron so much. I feel blessed every day that I have the honor of being this little boy’s mom. I am so grateful for the love he has for me and I am grateful for the overwhelming love I have for him. In the second photo, I love to look at the joy in our faces. It is a testament to how far we have come in our journey. The contrast between the photo at the funeral and the photo of us laughing and playing brings tears to my eyes because I know and remember the heartache and miracles found in that journey from one place to the next. It invokes emotions and it makes me feel so grateful that we have truly achieved joy in this journey. I am truly blessed to be Aaron Jr’s Mom.

Thank you for your kindness in opening your heart to share this piece. What a blessing that your husband has the legacy of a wonderful (and cute) little boy! May God continue to bless you both.

i am grateful to the ladies of the Power of Moms for allowing me to write this and share these photos. it made me ponder on some things and share some feelings that are precious to me. i love this website. what a treasured place to come and feel a connection with so many wonderful women… fellow mothers.

thank you to the Power of Moms ladies.

Thanks for sharing a small part of your story with the most important group of people on earth-mothers.  I can’t imagine how it must be to face each day feeling so alone.  So glad that little boy of yours is so smiley and happy and that when you are wondering what your worth and purpose is…he is right there to remind you.

Leslie, I’m so glad you had an opportunity to share this piece of your life with millions of moms out there.  You are such a strength to me and to so many others that you have no idea how far your example stretches.  Love you!

It is such a blessing to realize that God gives us no more than we can handle, and sometimes the way he helps us handle things is through those around us.  I think your responsibility as Aaron’s mom helps you handle the trial you’ve been given and come out stronger.  I am so glad you have the opportunity to be Aaron’s mom and a pillar of strength in his life.  Love you!

Leslie – your goodness and bravery rise out of the ashes of your story. As well as the way motherhood and our children transform us. You are a beautiful mother and I was so touched by your story. Thank you so much for sharing. And for continuing on with confidence. No doubt you will bless many lives with your example.

Leslie – Thank you so much for sharing your experience!  My cousin lost her husband last fall when they were both in their 20’s and she was pregnant with their second child – a boy due this month she will name after him.  I will pass this on to her.

i am so sorry to hear about your cousin losing her husband. if she ever needs someone to talk to or write or anything… someone who understands the feelings she is experiencing, i would be glad to hear from her. it has helped me to associate with young widows who know what i have gone through.

thank you for your comments everyone. i am grateful.

This is such a powerful article.  Thank you, Leslie!  I think many moms are convinced that “everyone else” has it easy.  It’s truly humbling to hear all the heartache you’ve gone through, but it’s equally inspiring to see what you’ve done with your life.  Thanks for being a light to all of us!

Thank you for sharing your story and your grief.  Your son Aaron is truly lucky to have you.

Thanks for writing that… what a journey you have had and what a blessing motherhood is.  I am glad you have much more of your journey with Aaron Jr ahead of you and hope you will continue to find joy and happiness.

Thank you for allowing me to see your heartache and joy.  It makes me want to hold my little people a little tighter and enjoy each day a little fuller!