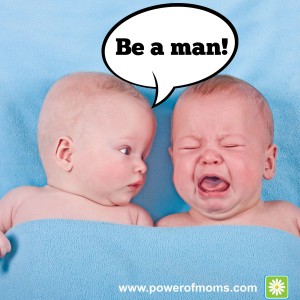 When it was time for my son’s six-month check up, our regular pediatrician was unavailable. So we ended up in the examination room with a doctor who was an older gentleman. He was professional, knowledgeable and competent, I’m sure. As he started to examine my son’s testicles, he saw something that concerned him. So the doctor started to squeeze and manipulate them, as he might have done if he felt a lumpy lymph node or something.

Except, these were not lymph nodes. To be fair, I don’t really know how this feels, but I’m told (and retold by nearly every gag in a physical comedy) that this area of the body is very sensitive. My son was certainly kicking his legs around like it was uncomfortable. But the doctor was undeterred or oblivious. My son kept squirming around which made the doctor double down his efforts to keep him still and complete the examination, until finally, the baby started to cry. And not just a little. He was crying for real and obviously in pain.

Unable to watch any more, I piped up, “Um, could we take a break? He seems to be really uncomfortable.”

The doctors replied, dismissively, “Oh, he’s fine. Nothing but his feelings are hurt.” And then, to my infant son, “Stop crying. You’re alright. You’re fine. Toughen up! I’m almost done here.” More squeezing.

Toughen up? To an infant?

I realized, in that moment, raising a boy was going to be complicated. I would have to fight an uphill battle against the loud messages from the society we live in about what it means to be a man:Be tough. Don’t cry. Hide your fears, your sadness, and your failings. Wear a mask.

I’m not an overly emotional person. My people are salt-of-the-earth, stoic, farmer types. We crossed plains and forged rivers. But I don’t believe in emotional masks. I believe in being genuine. I want to feel deeply. And this means both the good and the bad. I don’t mind being a crier, because it also means I can be a hearty laugher.

I try to teach my children, both the girl and the boys, to be genuine, too. But time and time again, pediatricians or teachers or coaches keep telling my son one thing—be a man!

Recently a friend of mine posted on Facebook the video “The Mask You Live In.” It’s a short preview for a movie that makes you think about the damaging mantra of “be a man.” When our boys hear that, they hear that they can’t show their negative emotions and they can’t back down from a fight. Don’t cry. Toughen up. Get over it. You’re fine. We essentially silence our hurting boys right when they need our help the most.

That video led me to listen to a TED talk by Joe Ehrmann. He proposes we expand our definition of manhood. He argues that instead of defining manhood by athletic ability, sexual conquest, and earning potential, we should define it as ability to maintain relationships and be committed to a cause. He urges us to tell our boys to feel real emotion and be a real person.

I like that expanded definition. I like that people are talking about the need to tell our boys it’s ok to be genuine and it’s ok to show emotion. This is good in theory. But I’m afraid I don’t see it much in practice.

From the playground to classroom, I hear adults telling boys, especially, You’re fine! Get up! Walk it off. Be a man! It doesn’t hurt. When clearly, it does. Kids, like adults, know when something is hurt. So what could we say instead?

Imagine this. My son plays baseball. On the baseball field, boredom is punctuated with bouts of panic, disappointment, and elation. These strong emotions come like lightening bolts and the little boys aren’t really sure how to handle them. But one message is made abundantly clear. DO NOT CRY!

One boy, after striking out for the third time, came back to the bench. He was upset, understandingly. And because he had also been pegged by an errant coach pitch, he was hurt. The combination of physical pain, emotional hurt, and, frankly, the heat of a summer day was too much. He began to cry.

His mother loudly and vehemently began to hiss, “Don’t you cry! Stop that! Nobody wants to hear you cry! You know only babies cry.”

My heart hurt, just as it did when my tiny infant was told to “toughen up.” I really wished that someone would’ve heard the things this boy couldn’t say out loud. I wished that someone could tell him, “It’s hot, you’re tired and disappointed. I get it. It’s hard to strike out. It’s not easy learning something new. It is totally normal to be upset.”

And then, instead of telling him to toughen up, someone could help him learn how to be strong in the face of adversity by telling him what he needed to hear: “But keep playing. You’ll get it! Each time you strike out, it’s an opportunity to show yourself you are strong. Breathe deeply so you can calm yourself down. If you can focus, even when you’re tired and spent, you’ll get better. You got this.”

I don’t have all the answers, but I do believe that instead of telling our boys to toughen up, we can show them how to be mentally tough and still emotionally tender. I want to teach my son to battle sadness, hurt, disappointment, fear–all of those hard emotions we all have to face–with strength, not denial. I want my son to be confident, not calloused.

But most of all, I want to raise the kind of boy who, when he sees his friend crying because he struck out, is brave enough to put his arm around his friend and say, “Striking out stinks. This game is not easy. But you’ll get it next time.” That’s a tall order for an 8-year-old, but not for the man I hope my son becomes.

QUESTION: How can you help your son be “confident but not calloused”?

CHALLENGE: This week look for opportunities to show your son that emotions are ok. Teach him how to work through them instead of ignore them.

Edited by Rachel Nielson
Image from Shutterstock with graphics by Anna Jenkins.