“Show me any two people who have fun together frequently, and I’ll show you a good relationship.”  –Erin Kurt

Does that apply to disciplining children?  Is it possible to have fun and discipline at the same time?  Well, it’s happening at our house (sometimes!), and I’m excited to share.

I’ve been one of those moms standing in the milk aisle, ready to scream because of the constant “Can we buy this?”  I’ve dealt with tantrums at the park, disrespect at the soccer field, and dozens of exasperating moments in department store dressing rooms (where my older children deliberate over which school clothes to buy while my younger children crawl under the dressing room doors).

While shows like Super Nanny teach some positive, replicable skills, many parents receive no further training, and it’s no wonder that every day feels like a never-ending battle.

My heart broke when I heard about the mother who was convicted of child abuse earlier this year after she submitted a video to Dr. Phil showing how she poured hot sauce down her seven-year-old’s throat and then stuck him in a cold shower.  That particular case was devastating on multiple levels, and clearly, my “fun discipline” methods can’t solve all the serious issues out there, but all too often, it’s the “little” things that get us all worked up.

Honestly, my children are pretty responsible, and we have systems in place to encourage cleaning up after ourselves, but there is no shortage of reasons to get frustrated.

So how do we have fun while we’re disciplining our children?  Here are two ways that work for us:

Mr. Potato Head has “angry eyes,” and Rumpelstiltskin from Shrek Forever has an “angry wig.”

I decided it was time I purchased an “angry hat”–something I can wear when I’m upset so my children know how I’m feeling. 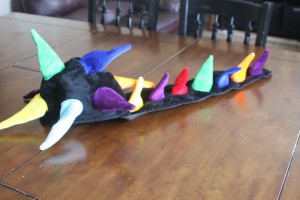 I initially hid the hat in the garage and waited for the next frustrating moment to come.  It took five hours.  Two children were whining about bedtime, one child was feeling emotional about a friend situation, the evening jobs hadn’t been done very well, and I was tired and totally spent.  I wanted to get out my angry voice and say, “Everyone get to bed and cut out the whining!!” But instead, I went and grabbed my Angry Hat.

My children laughed at first (yes, that was my fear).  They thought it was funny and tried to grab it off my head, but then I really got into the part.  I brought out the drama, stomped around while making growling sounds, and tried to make good “angry faces.”  Every once in awhile, I would break character and say, “Was that a good angry sound?”  Or, “Am I doing the stomping well enough?”

They would assure me that my stomping was fine–or remind me, “Mom, you don’t know how to make an angry face,” but in the end, they all went to bed quickly, and they stopped whining (I think the shock of seeing me in my angry hat made them forget what they were whining about).

I don’t like being a mad mom.  I think it hurts me more than it hurts my children.  They forgive me quickly, but on the nights I’ve lost it, I go to bed feeling terrible about myself and my mothering skills.  Something as simple as an angry hat diffuses that anger.  It lets the children know I’m not happy with how things are going at the moment, but that I love them,  I want to have fun with them, and I’m trying to make the experience better for all of us. 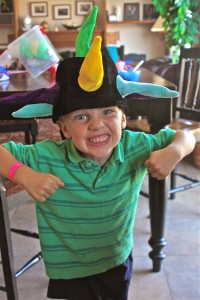 Oh, they make me laugh.

A few years ago, I bought this cute set of puppets: 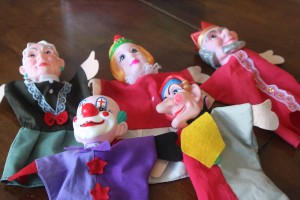 When I find myself in a mothering situation that I haven’t anticipated, I make a note of it in my day planner, and then I use those scenarios as puppet show scripts.

While trying to strap my son in his car seat, he smacked me in the face.  After buying our children a new laptop computer to share, they weren’t sharing.  Sometimes a child says she’ll put her laundry away, but it doesn’t happen.  Sometimes a child freaks out when she can’t find her homework paper, but then it appears right in her binder, where it was supposed to be.

I used to repeat the family rules over and over again and remind my children how these rules apply to each situation, but acting the problems out with the puppets is much more enjoyable–and memorable.

My children look forward to these occasional puppet shows.  After everyone is in their pajamas and has their teeth brushed, we gather on the carpet of my girls’ room.  I act out the events from the day–in a very melodramatic way–overemphasizing the bad behavior to the point of hilarity.

The names are always changed, and I try not to embarrass anyone, but they all know what I’m talking about.

After the show, I say, “Now, let’s try this again and show what should have happened.”

Amazingly, my children always know what the “right” behavior is.  I give them turns with the puppets, we talk about the situation, and it works beautifully. 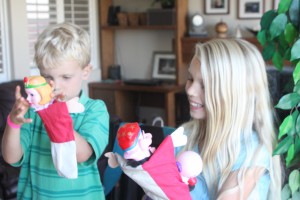 This doesn’t eliminate the behavior problems, but it often ends that specific problem.  (My son doesn’t slap me anymore when I put him in his car seat.)

Angry hats and puppet shows are just two examples that have worked for my children–and with my personality. 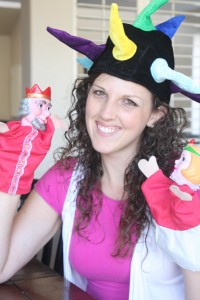 Maybe your children would respond better to something else, but the point is not that you need to do what I do.  The point is that we need to be creative with our anger management and discover a variety of ways to teach our children.

QUESTION: How have you creatively dealt with behavior problems in your home?

CHALLENGE: Identify one way you could add a little fun to managing the madness in your home–and then try it out!