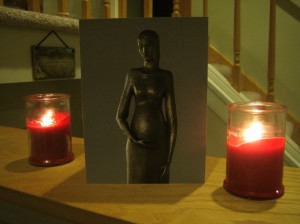 Advent came alive in a whole new way four years ago when, in the span of one dark December, my world changed from

The first Sunday of Advent that year had brought deep breaths in the pew and a resolution to Just Forget How Awful Christmas Felt Last Year And Make It Through Church Today Without Crying.

The second Sunday slumped into predictable pessimism: It Is Never Going To Happen For Us and I Wish I Could Stop Wanting It To Happen.

There was this miraculous Wednesday in the middle of a cold winter week. A bright, brisk morning, blanketed with snow, that brought with it one pale pink line—the first that dared to be real and not mere hope. And with it (and the second and third tests that followed, just to be sure) came utter amazement.

I was going to be a mother.

What seemed simple and natural for so many couples was for us the culmination of months and months and months of charts, drugs, hormones, doctors, tests and trials. To say nothing of prayer, tears, frustration, anger and more prayer. Frustrated, fitful prayer. The process was painful and all-consuming.

But standing in our dimly-lit bathroom that December morning, shivering in my bathrobe, staring as the faint line surfaced on the test stick shaking in my hand, I saw sorrow transformed before my eyes. And as I shrieked to my husband and started jumping with kid-like joy, our tears literally turned into dancing—crazy, goofy, running-around-the-house dancing.

From that day on, December was different.

I remember sitting at church the next Sunday, still giddy from the surprise, still floating on cloud nine. As I listened to our pastor proclaim familiar words, the angel’s startling news to Mary, I leaned forward, realizing I would never again have to grit my teeth through another Christmas chorus of “For unto us a child is born.” This season of joyful hope, of a countdown that changes everything, was becoming real in a whole new way.

I’d always believed that Advent was about preparing for what lies ahead, pausing in winter darkness to welcome the light. But when we started to journey through the dark years of infertility, waiting took on a weightier meaning. I began to learn—in the painful, plodding way that learning takes—what preparation and patience and persistence really meant. So when I discovered the surprise, the total shock of new life fluttering deep within me, I caught a different glimmer of Advent’s waiting.

I knew deep down, even in the midst of my goofy, giddy joy, that becoming pregnant was not the only way to discover what Advent meant. Of course that wasn’t how life, or faith, or God, works. But I also realized that the gift of carrying hope after holding heartache brought with it a change that had nothing to do with pregnancy hormones: a new awareness of mystery, wonder, and pure crazy hope.

From then on, the season was never the same. And it was because infertility had darkened our doorstep that I learned how to see in a different light. 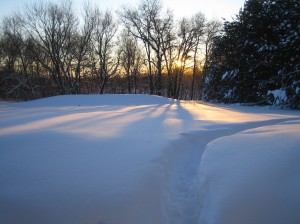 Two years later, during another dark December, a snowy Saturday that swirled into a record-setting blizzard, I stood in that same bathroom, squinting at another test stick in disbelief. We were going to be parents for the second time.

Scooping up our toddler into my arms, I ran into the living room to tell my husband, to laugh and cry and jump on that same couch where we had whooped with joy to celebrate news of our first son’s coming. Could it be true? Was our Christmas gift arriving early?

Later that afternoon, I watched out the window as the sun set in long pink stretches over white heaps of snow. I thought about waiting, preparing, bustling around in anticipation to get everything ready—all the hope and hurry of the holiday season. I rested my head against the cool window, fogged the glass with my breath, and closed my eyes to whisper my own yes. My own let it be done. 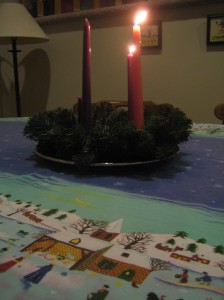 Now with each December I return to those two anniversaries, The Days We Found Out. I circle the dates on my calendar, moments that only a mother remembers, and I light a candle in the dark of winter night to mark the memory, grateful from the depths of my core where that still-surprising and long-awaited life sprung, for the gifts of my two boys. Even grateful, in a strange way, for the infertility that taught me waiting as a way of life. And full of gratitude for the Advent anticipation of my babies’ arrivals, the discovery during the darkest season that our holidays would be filled with new light and hope. And goofy, giddy joy.

QUESTION: How has becoming a mother – or desiring to become a mother – changed the way you celebrate the holiday season?

CHALLENGE: Create a simple ritual to give thanks during the bustle of December. Light a candle, sit down with a hot cup of tea, or rise a few minutes early to enjoy the quiet before the house begins to stir.

Laura lives with her husband and two young sons in Minnesota. She writes about the intersections of faith and family life at Mothering Spirit and her first book, Everyday Sacrament: The Messy Grace of Parenting, will be published by Liturgical Press in fall 2014.