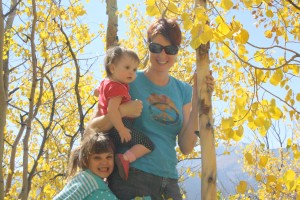 Our family was headed out the door after dinner for an evening walk and bike ride. We had intended to make these outings a regular part of our early autumn after-dinner routine, but in reality, we had only made it happen about three times.

Our baby was in the stroller and our six-year-old was riding her bike ahead of us. It was a beautiful September evening; still warm, but cooling down just enough to feel that enticing crisp in the delicious fall air.

Our excursion did not begin at all harmoniously. True to form, our oldest whined when she discovered that we were not walking to the nearby park, but had chosen a rather circuitous route through an open space trail toward the middle school playground. She pedaled along in front of us, sobbing about the injustice of our decision, pleading with us to change our minds, and raging about how she hated hiking.

I refrained from pointing out that she was not, in fact, on foot, and my husband and I carried on as though she were not disturbing the peace of our evening stroll.

Before we reached the school playground, something happened. Nothing dramatic or specific enough to even pinpoint, just a subtle movement in the energy around me. After months of spending the majority of my days bleary-eyed and frustrated with sleeplessness, I felt a shift.  For some reason, I began to picture our life as a family ten years down the road.

I knew we would not be waking up three times at night with a nursing child, nor would we be potty-training, teaching a kindergartener how to ride a bike, or dropping off kids at preschool. We would have arrived at an entirely different stage of life.

It wasn’t that I longed for this advent, or even that I was weary of our current placement in the early childhood phase of parenting. I just realized that this time was fleeting; I felt simultaneously grateful for where we were and excited about what was still to come. I could sense the transformation that was stretched out almost tangibly in front of me, and though I did not want to rush it, I knew when the time came I would welcome it.

Somehow, imagining our future grounded me more gratefully in the present.

As we reached the playground equipment I was still immersed in my musings. I watched my six-year-old daughter trot off to the climbing structure, already befriending the two boys who were perched on top. I stretched out on the grass, half watching a football practice happening on the field nearby, grinning to myself as I continued to ponder what life would be like when our kids attended this junior high.

At that moment, my 11-month-old crawled gleefully toward me across the grass. Before she was conceived, we had endured several consecutive pregnancy losses. It dawned on me in that moment, in my heightened awareness, that she was the baby I had longed for during those months. And here she was. Sophie personified the realization of my hopes and dreams.

As we walked home, I continued to bask in my altered state; the sky seemed bigger, brighter, more expansive. Maybe I just hadn’t looked at it for awhile. Maybe it was the fresh air, or the exercise, or the fact that I had taken a long nap that afternoon, but I finally felt fully awake and content.

I smiled at my husband as he walked next to me. I felt as though I was really seeing him for the first time in weeks, maybe longer.  I saw the freckles on his hands, the crinkles by his eyes.

I was under no illusion that the months to come would be any less sleep-deprived or that I was now bestowed with an everlasting supply of patience and perspective, but I felt confident that I could return to this space as needed to remind myself of just how beautiful my life was. That, good or bad, this too shall pass.

I gratefully accepted my infusion of energy and optimism, reminding myself that moments like this do happen from time to time, and they are often just what we need to recharge our batteries for the challenging weeks and months that lie ahead, until we are fortunate enough to receive another tranquil, transcendent moment of perspective.

QUESTION: What recharges your batteries?

CHALLENGE: The next time you are immersed in a moment of chaos in your day, take a minute to find the stillness. Imagine your life years down the road. What will you miss about your family in the now? What are you excited about?

Stephanie Sprenger is the mother of two daughters, ages six and almost one. As a board certified music therapist for twelve years, Stephanie has worked with children with a variety of special needs in her private practice, and currently teaches early childhood music classes in the Denver Metro area. As a control freak living amongst chaos, blogging has become a satisfying outlet for her parental angst, combining her passions of writing and helping mothers connect. When afforded the rare opportunity for some leisure time, Stephanie enjoys reading, writing, singing, and practicing yoga. Stephanie considers herself a warrior for “mommy rights,” believing that every mother deserves guilt-free time to herself: to enjoy a hot shower in peace, read a novel, have a date with her partner, and occasionally savor a meal. She blogs at Mommy, For Real