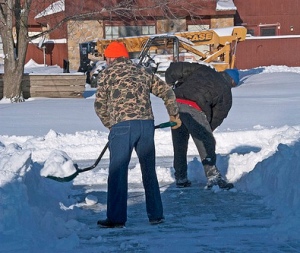 This morning my neighbor Mary came over for a visit.  She brought her two little boys, the same ages as mine, and didn’t even bat an eye when my two year old balled his little hand up in a fist and punched her two year old.  Which is only one of the many reasons why I love her.   The other reasons?  Too many to name.  But I’ll try to illustrate with a story:

Last January I was over at Mary’s house, picking up my boys.  She had watched them for me so I could volunteer in my daughter’s kindergarten class.  (Just another reason why I love her — but not the point of the story).  We were standing out front talking, enjoying a moment of sunshine that was doing its best to thaw the outer layers of snow and ice that had frozen our mountain-community, when a man from our neighborhood approached.  He was someone we both knew, neither of us well, but we were aware of the fact that he was struggling with MS.   He was out on a walk, using a cane to navigate the snow packs.  But the ice was everywhere, and the cane wasn’t enough to steady him.  As he neared Mary’s house, he slipped and fell hard.  While I stood there, processing what had happened, Mary was already running carefully toward him. She crossed the street, jumped through the snow, and helped him to his feet.  All this despite the fact that she is tiny.  Absolutely, exquisitely petite.   The man tried to say he was fine and didn’t need any more help, but Mary ignored him, cheerfully taking him by the arm and leading him to safe ground.

I watched her in awe.  Me who deliberates, who second guesses myself, who worries whether or not something should be done instead of just doing it.   Me who is twice her size and really should have been the one to help him to his feet.  But that’s the difference.  She didn’t wonder if she should help, or if she could.   She just saw someone who needed help and she gave it.

Afterward, when she returned to her house, her little Parker asked, “Who is that, Mom?”  She answered so simply, “Our neighbor.”

I hope you all have a neighbor like Mary.

QUESTION: Would helping your neighbor have an impact on your relationship?

CHALLENGE:  Find a neighbor you don’t usually help and be of service to them.

Janessa Ransom grew up along the banks of the Boise River. At eighteen she left for a view of the Charles River in Cambridge, Massachusetts. While studying English literature she met her husband, and then stayed in Massachusetts to start her family. Now she resides in Utah, alongside the appropriately named Dry Creek. She is the mother of four children, and spends her non-mothering time reading, writing, biking, and sewing. Visit her blog at Gallery of Portraits.